It’s hard to believe Easter has come and gone and we’re already a week into April here in the Florida Keys.  I’m glad because we should be clear of any vestiges of winter.  It’s always a possibility a cold front will push through this time of year but for the most part, it’s balmy temps and winds from the east.  With balmy temps it should be no surprise to anyone that the Silver King will be making its yearly migration through Islamorada and its backcountry.  We had good tarpon fishing in the backcountry in March when the weather cooperated and as our weather stabilizes and our water warms it’s only going to get better.  Depending on the day, good numbers of tarpon have been moving on the ocean as well.  Most of these fish have been somewhere in the 60 – 80 pound range with some larger fish around as well.

If you’ve never fly fished for tarpon before, prepare yourself for a fishing experience unlike anything else.  It’s a physical, psychological and emotional commitment.  Forget all the stuff you’ve seen on TV.  Trust me, it doesn’t happen that way.  Catching any of our gamefish species on fly is not easy but tarpon fishing adds a physical element that the others lack.  Sure, the size of the fish will beat up an angler, but a lot of the time you’re getting bounced around in a pitching boat.  Casting to fish while trying not to fall overboard is not easy my friends!  If there is one thing any tarpon angler should prepare for it is this: Wind.  Contrary to what is shown on TV, tarpon fisherman are generally faced with wind, and a fair amount of it.  If there is one piece of advice I can give to the flycaster who is coming to the Florida Keys it is to learn to cast in the wind.  If you don’t know how to double haul, spend some time and learn it.  It is a necessary skill set and will make casting in the wind far easier.

The one thing I love about tarpon season is that everyone is tarpon fishing.  Don’t get me wrong, I love tarpon fishing as much as the next guide, but there is something to be said for running out back to go snook fishing and having Everglades National Park seemingly to yourself.  Ditto for redfish, permit and bonefish.  This time of year the limelight is on tarpon but fishing on a whole is great for everything else and there are far less boats to contend with.  The last two weeks were evidence to that.  Snook fishing was as good as it gets and we had all to ourselves.  Snook on fly is as cool as it gets but sight casting to snook over 10 pounds on fly is amazing.  Seeing that big bucket mouth inhale a fly is a heart stopper!  Until next time.  -Pete 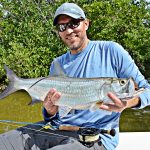 After a few months of being closed to all non-residents, the Florida Keys officially opened to tourists on June 1.  All hotels, restaurants and businesses are open but operating with social distancing measures in place but those measures dependent … END_OF_DOCUMENT_TOKEN_TO_BE_REPLACED 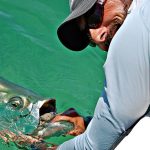